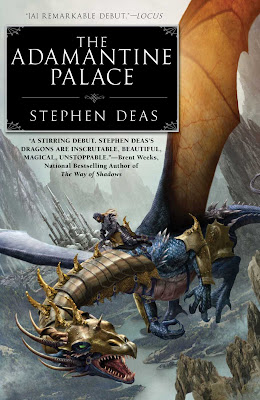 
The Adamantine Palace lies at the centre of an empire that grew out of ashes. Once dragons ruled the world and man was little more than prey. Then a way of subduing the dragons through alchemy was discovered and now the dragons are bred to be mere mounts for knights and highly valued tokens in the diplomatic power-players that underpin the rule of the competing aristocratic houses. The Empire has grown fat.
And now one man wants it for himself. A man prepared to poison the king just as he has poisoned his own father. A man prepared to murder his own lover and then bed her daughter. A man fit to be king?
But unknown to him there are flames on the way. A single dragon has gone missing. And even one dragon on the loose, unsubdued and returned to its full intelligence, its full fury, could spell disaster for the Empire.
But because of the actions of one unscrupulous mercenary the rivals for the throne could soon be facing hundreds of dragons . . .
Stephen Deas has written a fast moving and action-fuelled fantasy laced with irony, a razor sharp way with characters, dialogue to die for and dragons to die by.

Betrayal, deceit, savage power-plays, brutal politics and dragons. The arrival of an exciting new talent on the fantasy scene.

Source: Info in the Book Description was taken from the publisher's website at http://www.orionbooks.co.uk/books/the-adamantine-palace-paperback on 05/12/2010.

Review:
A good start to a promising new series!

I picked this book up simply because it got dragons in it and glad that I did! The story telling quality is not bad. Quite compelling. The author has a very good "voice". What I didn't like is the way the author kills off characters I like!! The ending is also not very satisfying... it was not a cliffhanger, but it wasn't a satifying resolution. It was just sort of so so. Overall though, I enjoyed this book and looking forward to reading the next book in the series, King Of The Crags.