I really, really like the covers of these books and I also like this author's "voice". But Book 1 started off really slow. The kick-ass heroine runs around in her harley being chased by the law for chapters on end... WTF!! However, it did get better about a quarter towards the end. But then I think that was because I've inadvertently read a spoiler from Book 2's synopsis. I therefore discerned that there is a dragon in it somewhere! Interest perked up again!

Towards the end, Allyson's story telling magic kicked in again and I would say that it was worth trudging through the first three quarters of the book. And of course it's a happily-ever-after (HEA) and I like the way Allyson James delivered it!

Book 2, like Book 1 is also a slow starter, but knowing Allyson James I persevered. It picked up quicker than Book 1 did and it was a great ride from there until the end. Allyson James' "author's voice" is very compelling even though she does have moments of dullness. The world building started in Book 1 is enhanced in my opinion in Book 2. It's like wine, it gets better with age

. Or it could be that this series has grown on me. Allyson James's books tends to do that to me. A quality which I attribute to her marvellous story telling abilities!

Final verdict: Book 1 was good, Book 2 is even better! 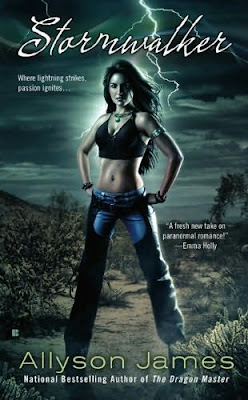 
Half-Navajo Janet Begay possesses extraordinary power which is tied to the storms that waft across the desert. The only person who can control her when she's caught in the storm's evocative power is Mick, a dark-haired, blue-eyed biker Janet can't seem to touch with her powers. He can wield fire and not get burned, and Janet's never sure where he goes when they're not together.

Together they investigate mysterious disappearances, which Janet fears are tied to her mother's people, the mythical gods from below the earth. They are helped along the way by Coyote and Crow, but these shapeshifting gods have their own agendas.

Book One of the Stormwalker series.

Source: Info in the About Stormwalker was taken from the author's website at http://www.allysonjames.com/stormwalker.html on 13/02/2011. 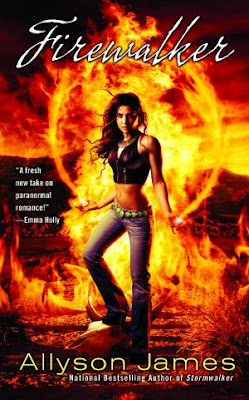 Firewalker by Allyson James
Book 2 of the Stormwalker series.


Janet Begay's Crossroads Hotel has attracted the supernatural ever since it opened. But a new, dark power is rising, this time inside Janet herself. Her boyfriend Mick, a sexy dragon shapeshifter the Navajo call a Firewalker, know what terrifying magic is threatening to overwhelm Janet and her Stormwalker powers. He watches over her, ready to fight for her, to do anything to keep her safe.

But then a mysterious corpse is found near the Crossroads Hotel-and Janet becomes the main suspect. Now Janet and Mick must uncover what really happened, and their investigation leads to the most perilous decision of their lives...