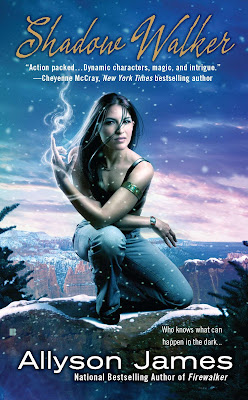 Stormwalker Janet Begay returns home only to have the ground collapse beneath her - literally. After tumbling two hundred feet underground, Janet is rescued by her dragon boyfriend, Mick. But something dark touches Mick while in the sinkhole, and Janet might lose him forever unless she recruites the most unlikely of allies to stop the growing shadow.

Source: Info in the About Shadow Walker was taken from GoodReads at http://www.goodreads.com/book/show/9670016-shadow-walker on 19/12/12.

What I Liked:
I am an old Allyson James fan so I am already familiar with her "author's voice" and I know that the story telling quality of her books is good. I also know that she can spin a beautiful world which I could totally immerse get lost in. I am an escapist reader, so I like worlds where I could get away from reality. And the world of Janet Begay is such a world. But that is not the bestest best thing about this book or this series... the feature I liked most is that the dragons in this world interacts with our contemporary world in a realistic way. I am a dragon geek after all!

And besides, I am sucker for bad boys!!

What I Didn't Like:
I'ts not that I don't really like it, it's more like it kinda contributed to diminishing my enjoyment in this book. The thing is, this book dragged at times in the middle. I can't really pin point why. It's just that my mind wanders away and I find myself staring at the came page for moments on end. And I realize that I was just staring and not reading and so I start reading again. After sometime of that I would give up and put the book down to be picked up again later on in the day. This made the reading a bit longer than usual for a book with a good story telling quality. However the pace became quicker once past about three quarters into the book and it was fast until the last page.

Final Say:
In the end I enjoyed this book alot, dragging parts and all, and am looking forward to reading the next book in this series which I already bought and waiting for to arrive in the mail!

Books In This Series: